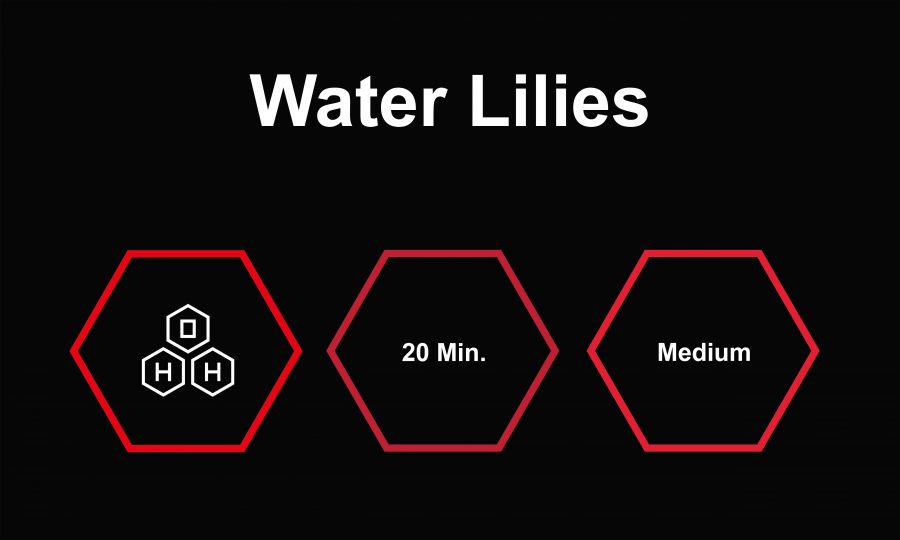 The Science Behind AI Blossom

AI Blossom is a robot flower inspired by the plant world. The AI Blossom opens and closes its petals due to external influences such as touch/approach or light.  The attractive design with its proximity to the natural model and the transfer of principles from the plant world to technology by means of mathematical and technical questions round off the teaching of curriculum topics in STEAM education.

Inspired By A Water Lily

The water lilies (Nymphaea) are a plant genus in the water lily family. The genus, which is widespread worldwide, comprises about 50 species. These water plants form elongated or bulbous rhizomes with which they are anchored in the mud of rivers, ponds and lakes.
Two types of alternate and spiral leaves are formed: floating leaves and underwater leaves. The leaves of water lilies always lie on the water surface. They have a waxy coating on the surface.
In water lilies, the centre of the flower is more or less empty, with a ring of yellow or orange stamens.

The tiger lotus originates from Africa and South East Asia. It originates from Africa and South East Asia. The species, also called White Egyptian Lotus flower, has two colour morphs, one with green leaves and red spots (Green Tiger Lotus) and one with red leaves (Red Tiger Lotus). The single standing flower has a diameter of 12 to 25 centimetres. It opens at night, several nights in a row. With lotus flowers, the centre of the bloom is always full. There is also a wreath of stamens, but in the middle of it there is a structure that looks like an old-fashioned shower head (in which the seeds later ripen). In the case of lotuses, only the very first leaves of the season float on the water surface. All the later leaves stand on high stems above the water surface. The leaves feel velvety and do not shine. 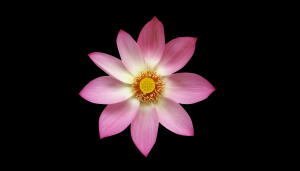 Actually you should not touch the leaves of the mimosa, because the plant is very sensitive. If you touch the delicate pinnate leaves of the mimosa, they collapse one after the other. This defensive reaction protects the plant from possible predators. Because the folded leaves make it look less attractive than with spread, clearly visible leaves.
In this way, the plant reacts to shocks, but also to rapid temperature changes and changes in light intensity. Only the leaves of the affected plant region fold in. The entire branch collapses in the event of particularly strong vibrations.

The mimosa needs twenty minutes to one hour to open the leaves again.

Therefore, it is better for the mimosa to recognize harmless stimuli and not to collapse its leaves every time. So the mimosa has learned to distinguish between known, harmless and unknown, possibly dangerous stimuli. During the day the leaves of the mimosa are open. Over night it folds the leaves back in again. The flowers of a mimosa only bloom for one day.
An ingenious mechanism within the water-filled cell structure in the leaf ensures that, when an external stimulus is applied, no more water presses against the cell walls from the inside, causing the cells to slacken and the leaves to contract.
Mimosa plants are found in subtropical and tropical forests. 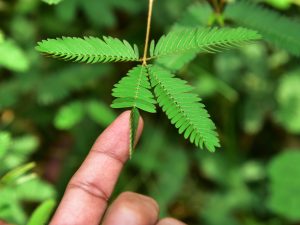 The sunflower is a herbaceous plant in the daisy family. Its special feature is that the plants are very dependent on light, i.e. even slightly less sunny plants are much smaller. Sunflowers are a typical plant of warm locations. It has its maximum growth at 20 degrees Celsius and its cotyledons collapse at night. The nodding flower baskets have a diameter of 10 to 40 centimetres.

The mostly yellow ray flowers are 6 to 10 centimetres long and the tubular flowers are brown. The flower heads always rotate so that they look into the sun. Thus, the sunflower lets its flowers follow the course of the sun. This phenomenon is called heliotropism.

Can you find the Fibonacci spiral in the sunflower below? It’s the same pattern that is implemented in the AI Blossom light design.

STEAM is an educational curriculum that teaches across disciplines and combines the following fields:

AI Blossom covers all STEAM aspects. In this tutorials we will explain the scientific and biological background and mathematical phenomenas that are found in nature.
In the posts we will explain the principles and components used. The mechanical structure, stepper motors in general, as well as the basics in coding and the use of proximity sensors are covered.

We use cookies on our website to give you the most relevant experience by remembering your preferences and repeat visits. By clicking “Accept”, you consent to the use of ALL the cookies.
Cookie settingsACCEPT
Manage consent

This website uses cookies to improve your experience while you navigate through the website. Out of these, the cookies that are categorized as necessary are stored on your browser as they are essential for the working of basic functionalities of the website. We also use third-party cookies that help us analyze and understand how you use this website. These cookies will be stored in your browser only with your consent. You also have the option to opt-out of these cookies. But opting out of some of these cookies may affect your browsing experience.
Necessary Always Enabled

Performance cookies are used to understand and analyze the key performance indexes of the website which helps in delivering a better user experience for the visitors.

Analytical cookies are used to understand how visitors interact with the website. These cookies help provide information on metrics the number of visitors, bounce rate, traffic source, etc.

Advertisement cookies are used to provide visitors with relevant ads and marketing campaigns. These cookies track visitors across websites and collect information to provide customized ads.

Other uncategorized cookies are those that are being analyzed and have not been classified into a category as yet.